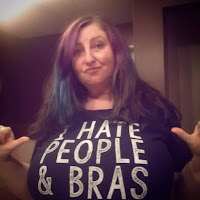 So I’m going to just keep going about in the world with my natural body shape until it seems less weird.  I’m happy.  I’m comfortable.  My mental health is improved.  And my boobs are a little bit bouncy and closer to the ground.  I’m good with it.
Posted by Pam at 4:17 PM 8 comments: