Since the bikini experiment of summer 2011, I have only worn bikinis to swim.  Every swimsuit I have bought or worn for two years has been a bikini.  Wearing a bikini has become a few things for me:  A symbol of my continuing commitment to unconditional self-love, a touchstone for my self-image, and my own little revolutionary act.  I want to be a living example that body love, confidence, and beauty don’t have a weight limit.  Be the change and all of that.  I have a “Be the change you wish to see in the world” window cling on my driver-side minivan door as a daily reminder that we are part of making the world we live in.  I wear a bikini because I want women who worry about their bodies to see me, and worry a little bit less.  I want curvy, large-busted, and plus-size women to see that they have options (Fantasie bra-sized bikinis!)  And, more selfishly, I want to make sure I don’t slide back down into blending in and trying to hide.

Here’s what happened.  My kids were invited to a swim party.

To set the scene for this story, let me tell you a little bit about the area where I live.  It’s in suburban , one of the best school districts in the country, and typically listed as the top 10 “affluent” places to live.  We chose our house because we fell in love with the openness of it and the schools were amazing.  Our immediate neighborhood is racially diverse, which was important to me, and the houses were all built at different times by different builders, carved with restraint out of the woods a plot at a time without strip-mining the place to build a development.  I saw that our income and home price fell well below the median for our school district, and my thought was, “Awesome.  Let their property taxes pay for my kids to go to a kick-ass school.”

And now my kids go to that school.  And the school rocks.  No lie, it’s awesome. And there are some people like me there.  But there are way more people not-like-me.  Diamonds are big.  Countertops are granite.  Hair is blonde and smooth.  Sometimes brown.  Not blue.  People aren’t fat here.  It’s not allowed.  If you’re fat, you run half marathons or go to “boot camps” until you’re not fat anymore.  You post your exercise on facebook using an app on your phone, and eat lots of skinless chicken and salads.

So into this weird world, my kids were invited to a swim party.

It was their second one actually.  After much deliberation and gnashing of teeth, I wore my bikini under a dress to the first swim party earlier this summer, but no parents swam at that party, so my jiggling, winter-white, abundant self was kept under wraps.  No other parents swam at this last party either.  Except for me.

We arrived at the pool, and the parents were all standing around, fully dressed.  I breathed a sigh of relief, realizing I wouldn’t have to expose the bikini to them at this party either.  Or expose what the bikini doesn’t cover.  My daughter immediately started begging me to swim with them.  I showed her that none of the mommies were swimming, and encouraged her to go play.  She did.  But she kept asking.  And the only reason I said no was body shame.  Shit.

(I do know that no, of course they wouldn’t gossip about me later.  I know with my brain that this isn’t about them at all.  This is my stuff.  Social anxiety is such a narcissistic asshole.)

Anyway, a bunch of the kids moved to an indoor heated pool, one with a fairly steep drop-off with water over my kids’ heads.  My daughter can swim.  My son can’t really.  Both begged me to come in with them.

I took off my skirt and seriously considered leaving my tank top on.  But I didn’t.  I took it off and I swam with my kids, while all of the other moms stood around fully dressed with their coiffed ponytails.  When I put my hair in a ponytail, it doesn’t look like that.  I think maybe you have to blow dry or hot roller your hair first to have it look like that in a ponytail, and if you’re going to go to all that trouble, why wouldn’t you just wear it down?  It’s all a mystery to me.  But my kids asked me to swim with them, and my son kind of needed me to swim with them.  So I swam.  In a black bikini.  At 220 pounds.  My son practiced his back float.  My daughter practiced her freestyle side breathing, backstroke, and flip turns.

Not too long after, they moved the party inside to a party room.  I put on my clothes, gratefully, even though my wet bathing suit left two wet spots under my boobs and I couldn’t sit down for fear of also having a wet ass.  I said something to two of the moms about the bikini thing.  I explained about the blog and how I am a body-love advocate.  I explained because, if they gossiped about me later, I wanted at least a couple of people to be able to explain why on earth I was wearing a bikini.  At my size.  One mom nodded politely.  Kill me.  The other mom looked thoughtful and gave me a smile and a high five.  Gratitude.

I’ve gotten to the top of one mountain.  I look in the mirror and I’m happy most of the time.  I wear bikinis.  I am the change inside myself.  I love my body.  I think I’m beautiful.

But there’s a new mountain.  One made of class distinction and baggage from high school and fear that a weird mom with blue hair who wears bikinis at 220 pounds will somehow stigmatize or marginalize my kids.  The change I wish for is happening in the world too, but slowly.  For that change to come, people like me need to stand up and be seen.  Even when it's hard.  Especially when it's hard. That thoughtful high five, that's the change.  I stand for something, something I believe in very deeply.  I hope that one day, that will be a good thing in my kids’ lives.  I hope that I am one voice among many working to change the world they will inherit.  I accept that one day, probably sooner than I can imagine, they will want me to blend in.

I hope I don’t cave.

So let’s say you have kids who are really into some obscure video game.  Or some non-merchandized TV show.  And they want a theme room.  Welcome to my world, people.  My kids don’t just like things, like normal people.  They get obsessed.  Seriously.  Also, I’m crafty, so when I tell my kids that “they” don’t make that toy or costume, my kids are like, “That’s OK, mom, you can make it for us.”

Many of my “make it for them” moments are such ludicrously time-consuming labors of love that I don’t even post them here, because they look like a bad case of Pinterest-perfect mommy syndrome.  I’m not perfect.  I’m just crafty.  And slightly (charmingly??) insane.

But this latest project was just so… do-able!  It didn’t require hours in front of the TV, hand sewing tiny cones stuffed with batting onto a certain Bowser costume.  It didn’t require mad miniature gown-sewing skills like a certain Rosalina plush doll.  It was easy!!  When I searched for a tutorial before I began, I didn’t find anything that fit the bill.  And when something doesn’t exist, apparently I make it.  So I’ll make a tutorial.  Here ya go.

How to make your own wall stickers

That link is for 10 sheets of Papilio 8.5X11” waterproof vinyl.  You can buy single sheets, or 100-packs (or more).  It also comes in larger sizes if you have a big fancy printer that can handle that kind of action.  Note: This vinyl is designed to work with inkjet printers only!!  You need access to an inkjet printer.  They do also make a laser printer vinyl.  It is likely the same adhesive and would work the same, but I didn’t test that, so I don’t know.

2)  Find images online.  For 8.5X11” paper scaled images, I found that at least 500 pixels in each dimension made decent enough stickers.  The higher resolution, the better.

3) Resize the images.  I used Photoshop to make them the right size to fit on my paper.  I’m assuming everyone has a favorite photo-editing program.  Use that.  Make them fit on paper.  If you have decent resolution to start, keep it at 100-300 pixels/inch or so.  You don’t need any higher resolution than that for this. 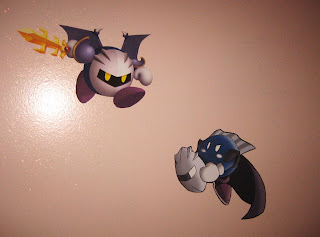 4)  Print your images onto the vinyl.  Use the glossy photo paper setting.  I just did normal quality, and they look good enough to me, and my kids are thrilled.

5)  Let them dry and then carefully cut them out.  I’m sure you could use a utility knife or some fancy stuff to cut them perfectly.  I used my junk drawer scissors.  The directions say to let them dry for at least 15 minutes.  They seemed quite dry to me after just a few minutes.

6) Peel and stick.  The peeling can be a little tricky to get started.  You know, stick your fingernail in or kind of mush the vinyl sideways with your finger until a little edge comes loose.  Be careful at thinly cut parts not to tear the vinyl.  Stick em on the wall.  Be a hero.

So basically, my entire tutorial is, like, go buy Papilio vinyl sheets.  Yup.  You’re right.  I don’t work for them.  I didn’t get paid to tell you this.  There may well be other products that would do the same thing.  I did this.  It worked.

A note on the vinyl.  Papilio also makes a product called “removable” vinyl.  That seems like it would be the right thing, but it isn’t.  It peels right off the wall while your child sleeps and then they cry in the morning, and you cry too because you foolishly bought 100 sheets of it for $70-something and it didn’t work.  Boohoo.  The stuff I used is labeled as “permanent” adhesive.  That seems scary, I know.  I tested a sticker in an unobtrusive area for 2 weeks and it came off fine.  The paint finishes in my kids’ rooms are eggshell or satin or some other word that means somewhere between flat and semi-gloss.  One has a glitter glaze.  Neither finish was damaged at all after two weeks.  Beyond that, I can’t make promises, but two weeks seemed like a reasonable test period to me.  I encourage you to buy a single sheet and do your own testing on your wall to make sure it’s safe.

A note on copyright. I don’t own the images on these stickers.  They are from the Kirby video game and TV show, and then shamelessly stolen from the web using Google image search and my trusty right click button.  I made these stickers for my own personal use and will not be selling them.  If you make stickers with copyrighted characters, don’t sell them, K?  Kirby people, please don’t sue me or whatever.  If you made wall stickers, dudes, I so would have bought them.  Trust me when I tell you that whatever crap you have made, I probably own it already, two of them in many cases, one for each kid.  And if you would re-release the King Dedede plush toy, that would be awesome, because otherwise I’m going to have to make two of those bad boys by Christmas…
Posted by Pam at 3:23 PM 1 comment: