Happy Patrick’s Day to my beautiful, talented, brilliant, discerning readers.  I raise a drink to you.  (Surely it’s 5pm somewhere on this, the day of drinking!)

Let’s talk about the damn Leprechaun.

All I remember about St. Patty’s from when I was little was wearing green.  And if people wore orange, you pinched them.  Right?  Am I making that up?  Was that regional?  Anyway, I got older, and it became about beer, green dyed or otherwise.  Guinness, black and tans, or Baileys if you were a girl-drink-drunk.  Then I got older-older and just drank whisky.  Usually not Irish whisky.  Scotch, mostly, which would probably really piss off Irish people if they cared enough to care.  But my hubs is half Irish and he doesn't seem to care, so whatev.

But these days, apparently, my children have informed me that the night before St. Patty’s, you clean the house, and then while you’re sleeping, the Leprechaun comes.  And that little fucker fucks that shit up.  Knocks over furniture, takes cushions off the couch, dumps out all of the crayons.

So basically Leprechauns are exactly like my children?  Except short and green and THEY DON’T EXIST SO I AM EXPECTED TO MESS UP MY OWN DAMN HOUSE?!  Excuse the barrage of bad language there.  But, seriously.  Mess up my own clean house?  Not cool.  Their teachers told them this.  Because one doesn't have kids yet and the other is a grandmother.

Look, I love my kids’ teachers.  We totally lucked out.  But teachers, you see how effed up this is, right?  Do you realize how much work you have made for me?  If you want another sweet Target gift card at the end of the year instead of a picture frame shaped like an apple, you’d better put the kibosh on this Leprechaun thing.

So love/hate I said in the title.  Where’s the love?  Here’s the love.  My daughter was so excited for the Leprechaun to come that she wanted to bring him to her bed.  No really, here is a sign she made for him so he could find her bedroom and "sleep with her."

She left it on the floor in the hallway outside her room.  She also created this adorable vignette of green shit to make sure the little homewrecker felt welcome.  Including hand-drawn artwork, a rainbow collage, a green crayon, and a whoopee cushion.  Which is almost... almost... cute enough to inspire me to mess up my clean house. Almost. 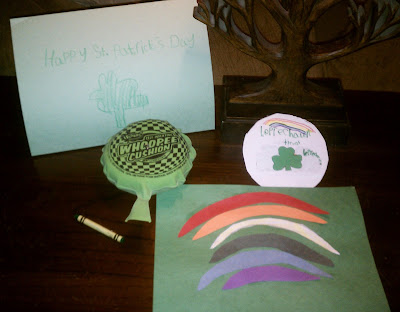 Instead, I decided to use distraction to minimize the mess.  A few chairs knocked down.  Couch cushions still on the couch.  No crayons dumped out.  And chocolate.  Green M&Ms pilfered from the M&M bag.  Gold coins.  Some letters to the kids and a trail of green sanding sugar.  Nothing like green M&Ms for breakfast to soften the blow of a less mischievous Leprechaun than average.

And the kids helped clean the house last night.

OK, so that was the blog entry I had completed and polished up, which is to say I read it over once and changed two typos.  Yeah, I wrote this last night in the past tense AS IF it were this morning.  Crazy, right?  I feel like I'm totally breaking the fourth wall here.  Yeah, I do that.  I write in the past tense about shit that hasn't happened yet.  I hope that doesn't mess up this honesty thing we have going between us.  It's all about time management and the fact that I'm funnier after a glass or two of wine.  At least in my own mind.

So here's what happened after I finished this entry.  My son had a major meltdown over wanting this Fire Mario hat because he was playing a Mario game with Fire Mario in it.  Who is Fire Mario?  You don't care. Don't worry about it.  Pray that you never need that depth of Mario-verse knowledge.  We let the kiddos stay up late on weekends, so he was extra tired and crabby.  He had a full scale tantrum, throwing himself at the ground, crying, wailing.  Not hitting, so that's awesome.  Here's the thing.  This Fire Mario hat is in our house, and he knows it.  It's in the "marble present" stash, a stash of gifts that we use to bribe our kids encourage good behavior.

Knowing it was in the house and that my strength of will was the only thing keeping it off his head was incredibly difficult for him.  I talked him about halfway down, reminding him of all of the ways he could earn marbles to get the hat sooner, and then reminded him that the (%$#& *%&@ %&#@!) Leprechaun was coming and might leave him some treats in the morning, hoping that the prospect of treats and a stupid damn Leprechaun messing up my clean house would be enough to cheer him up. 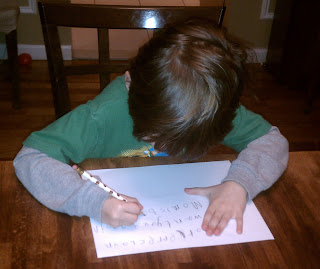 And then he had the brilliant idea to leave the Leprechaun a note telling him to sneak into our master bathroom and get him the hat for free.  Well played, Leprechaun, well played.

My son doesn't particularly like writing, and generally avoids it like the plague.  Yet, here he is, buckled down to write the Leprechaun a note.

So now both of my kids have notes on the floor outside their bedrooms.  One seeking a bed partner, and the other seeking instant gratification.  Here is his note: