I’m trying to be a good mom here, so will you kids please leave me alone?

My twins are turning four tomorrow and I am working like a mad woman to get ready for their party this weekend. I love planning parties, but here’s my problem. In considering the classic time-money trade-off, I tend to grossly overestimate the availability of my time.

My kids wanted a Mario themed party. Great! Boy girl twins with one theme. That’s easy! I started brainstorming ideas, and asked my husband to help me brainstorm, since he’s really the Mario expert in the family. His idea: Buy Mario plates from the party store and get a few balloons.

In retrospect, I should have listened to him.

But no. Here was my idea. Get old moving boxes from friends, and paint them to look like Mario bricks and question boxes so that the kids could build forts and walls and towers with huge life-size building blocks.

Awesome, right? I had a whole day laid out to work on this while the man watched the small ones. I bought what I now know to be a ridiculously small amount of spray paint, laid out the boxes, and…

Hardware store trip, and then commenced Operation Paint a Bajillion Boxes, take 2. It was a success. But it involved 6 hours of crawling on the ground with a paint roller. My back and right forearm were sore for three days. And I still had unassembled and un-decorated boxes. Twenty-two unassembled and un-decorated boxes that were now propped on every surface in my home, because even though they were dry to the touch, I couldn’t stack them or they would stick together.

If I could do the next phase of this project assembly line style, it would probably take me four or five hours. Draw on the brick pattern with a Sharpie Magnum (dirtiest-sounding craft supply ever), glue on question marks and rivets, and glue boxes together. It shouldn’t take that long.

Except that, see, I have these two kids. And even though this Mario party is for them, and they think that big boxes are cool, and they love building with blocks, and they love making forts that they can get inside, at any given moment they would really rather I get them milk, snuggle on the couch, play Mario Kart on the Wii so they can watch, get them a puzzle off the high shelf, and get them some tiny crackers. Time to interruption is approximately two lines drawn on a box.

They feel ignored, I feel irritable, and this has officially become the slowest project in the history of party planning. Staying up until 2am to get some quiet time to work on it did help me get a bit done, but the lack of sleep did not help with the irritability factor. I lost it on my daughter the next morning while trying to order red baseball hats on the internet, because the hats I had ordered from Hobby Lobby were backordered and they didn’t tell me that until I asked, which created a time crunch. Oh, and I also have to cut 15 copies of the M-in-a-circle out of sticky felt to make these hats into Mario hats for the favors. So no, my sweet child, I cannot play with you right now.

And then I looked at her face and felt like the worst mom ever.

I have been spending so much time and effort trying to plan this party for them that I have not been doing the stuff that matters way more. Stuff like snuggling on the couch, and playing hide-and-seek, and pretending to be Bowser and chasing them around the house. So I stopped comparison-shopping for red baseball hats and went to hug my kid.

They will love this party, and will be thrilled to pieces to play Mario in a fort/castle made of moving boxes. They will love that the cupcakes will look like goombas, and that the watermelon will be cut to look like a chomp. They will love the chocolate moustache lollipops if I get around to making those this week. But in the end, they just love me and want me to play with them. They would be happy to play in undecorated boxes, and eat chocolate straight from the package rather than melted into Mario moustache shapes, and eat cupcakes that didn’t look like goombas, and have a mom who was happy and relaxed and available for snuggles and hugs and play.

I wouldn’t have thought I needed to learn that, but apparently I did.

P.S. On the general theme of spending more time with my kids, as I was posting this blog, I went to check on my daughter, who is sick today, and when I came back to finish posting, my son had locked me out of the office. “I think it’s a good idea, so that you can’t go in there,” he said. OK, kid. I get it. I hear you, I love you, and I get it. 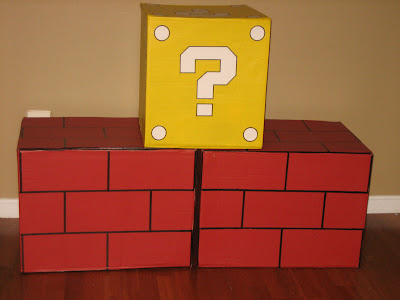