No such thing as a free dresser

Nearly a year ago, my sister saw this beautiful buffet sitting on the curb for trash. 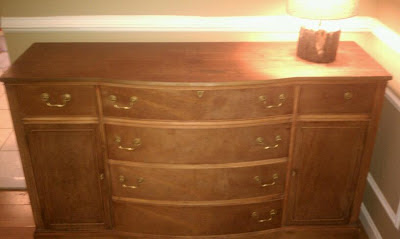 It’s solid wood, made by Bassett, and probably cost $1500-2000 new. I love the lines, softly curved without being prissy or ornate.  I knew it would be perfect as a dresser for my daughter’s princess room.  Painted white, pink crystal knobs that she can change out when she gets tired of everything in the universe being pink and sparkly.  Perfect.  And free.  FREE!  Who would throw this out?  They’re crazy!

Now before you judge me for painting this beautiful piece of furniture, I assure you that there is a lot of damage that is not visible in that picture.  Deep gouges and weird black stains on the top, bottom corners completely chipped away.  It hurts my heart to cover pretty wood with paint too.  I wish I could have salvaged this piece without painting it, but there was no way.  Painting it will give it another life.  I promise, I love wood as much as you do.  (That’s what she said…)

One more unfortunate reality that cemented the “paint it” decision was that once my sister got it into her house, she discovered the smell.  Apparently the crazy people who threw away a perfectly beautiful Bassett buffet smoked like chimneys.  It smelled like a chain smoker’s house.  Ugh.

So we got the ludicrously heavy thing back to my house and there it sat, smelling like stale smoke, for months.  OK, many months.  Like almost a year’s worth of months.  What can I say?  I got busy.  It happens.  And have you ever tried to paint a piece of furniture with two four-year-olds hanging on your legs?  I was completely daunted.  How would this EVER happen?  I can’t even manage to put my clean laundry away.  They live in a permanent pile on the ottoman in my bedroom, hang-up clothes laid flat so they don’t wrinkle.  How did I think I would find time to paint a dresser?

On my rare free days, I was painting the kids’ rooms so that we could get them into the separate rooms as soon as possible.  Bedtime had become a nightmare with the shared room.  A nightmare that often lasted past midnight.  So that took first priority.  And then, it was summer.  And it was time to paint the dresser.  I sanded what needed sanding (mostly the top), filled the extra holes with wood putty and sanded those smooth (because I’m using knobs instead of handles), and used a chemical deglosser to clean it and prep it for priming.

It had two different finishes.  Someone had clearly attempted a refinish job on it at some point and given up.  Most of the piece was fairly well stripped.  But the insides of the cabinet sections were glossy with a dark reddish stain.  Yuck.  I decided to use an oil-based primer to be on the safe side.  And to prime everywhere… inside the drawer openings, everywhere, to make sure we sealed in any remaining smoke smell.

But here’s the problem.  You can’t oil-based prime in the house unless you get serious ventilation going.  And every day I had free and my husband had free so he could watch the kids, it was 95+ degrees out.  Too hot to paint outside, too hot to open the double front doors.

Eventually we got a day in the mid 80’s.  Not exactly cool, but as good as we were going to get.  I threw open the front doors, opened the back door and some windows, and started priming.  Six hours later, I had finished the base unit inside and out.  I was exhausted, sore, sweaty, and covered in oil-based primer.  Oh, also, I didn’t buy mineral spirits.  Nail polish remover got it off the sensitive areas, like knuckles.  My pumice stone scrubbed it off the rest.

That evening, my left hand started acting up.  Pinky, ring finger, and bird flipper all numb.  Hand shaking with tremors, and too weak to hold anything.  My husband had to convince my hypochondriacal ass that it was just my crappy painting ergonomics, and that he was quite certain I didn’t have self-diagnosed MS.

It took another month to get another nice day so I could prime the drawers and doors.  It eventually happened.  And then it was time to paint!  Yay!  Painting is easy!  I can do that any day.  When it’s raining, when it’s hot out, when the kids are in bed, whenever!  Yay!  Paint!

Every time I painted, I got the hand tremors and numbness lasting 2-3 days.  So I guess hubby was right.  It’s not MS.  It still blows.  I tried changing my ergonomics, but there are only so many ways to paint inside a cabinet. Oh, and to make sure you all feel super sorry for me, I also splatted the Zinsser primer into my eyeball when I was hammering closed the can.  Bang, bang, bang, AAAGGHHHH!  Primer in my effing eyeball!!  Painting delayed as I flushed my eye with water hanging upside down under the bathtub faucet and then changed the clothes I soaked flushing out my eyeball.  Fun.  But at least it was the water-based primer, not the oil-based stuff.  Whew.

To add insult to injury (injuries), when I went to put the whole thing back together again, the cabinet doors on the sides were so tight that a kid won’t be able to open and close them.  The width added by the paint is enough to make them stick.  So they will be essentially non-functional.  We don’t really need that much storage, so it’s not that big of a deal.  I can just store seldom-used or off-season stuff in there.  But their lack of functionality kind of makes me wish I hadn’t spent two days priming them three extra times (four if you include the original primer) to try to reduce the pink stain bleed.  Could have saved myself that little bit of trouble.

So let’s sum up, shall we?  For almost a year, I had a slightly stinky, damaged buffet in my house.  And then for the past month—yes, month!—my foyer has looked like this: 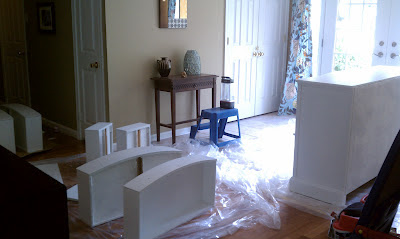 Those full-glass doors?  Yeah, they’re the front doors to my house.  The first thing people saw when they walked into my house was all of that crap.  For a month.  And my left hand hasn’t worked properly for more than a few days all month.  And I got primer in my eyeball.

Add to that the roughly $125 I have spent on paint, primer, brushes, rollers, paint trays, drop-cloths, etc.  The $45 I spent on the crystal knobs.  And the, hmmm, let’s say probably, I don’t know, 30-40 hours I have spent prepping, painting, etc.  I’m just saying, you can get an Ikea dresser for $200-300.  Yeah, it would be particle board and wouldn’t have these pretty lines, but all of the doors would open, my foyer would have been clean, my kids would have watched a lot less TV this month, and I wouldn’t have paint in my hair right now and a still-nagging worry that I might possibly have paint-induced MS.

The moral of the story?  Nothing is free.

Oh, and the extra bonus moral, don’t ever look up your symptoms on the internet.

So without further ado, here it is… my definitely-not-free dresser!  All finished and settled in its sparkly pink-walled new home!  Was it worth it in the end?  Um, I really don't want to talk about it. 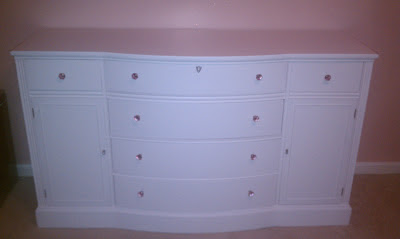 Email ThisBlogThis!Share to TwitterShare to FacebookShare to Pinterest
Labels: house, no such thing as free, painting furniture, princess room