A night before the first day of school poem adapatation


Tonight, I was lamenting my kiddos' imminent departure to kindergarten tomorrow morning.  My exact words were:

"OMG OMG OMG OMG. Breathe, Pam, breathe. It's just school. You're not sending them off to work in a mine."

In response, a friend posted this poem by Dan Valentine (presumably because she thought it would be funny if I anxiety-puked all over my keyboard):

I bequeath to you tomorrow one little girl named Lauren...in a crispy dress...with two brown eyes...and a happy laugh that ripples all day long...and a flash of light brown hair that bounces in the sun when she runs. I trust you'll treat her well.

She's slipping out of the backyard of my heart tomorrow morning...and skipping off down the street to her first day of school. And never again will she be completely mine. Prim and proud she'll wave her young and independent hand and say "Goodbye" and walk with little lady steps to the schoolhouse.

No longer will she have time to sit on the front porch on a summer day and watch an ant scurry across the crack in the sidewalk. Nor will she have time to pop out of bed with the dawn and kiss lilac blooms in the morning dew. No, now she'll worry about those important things...like grades and which dress to wear and whose best friends is whose. And the magic of books and learning will replace the magic of her blocks and dolls. And now she'll find new heroes.

For five full years now I've been her sage and Santa Claus and pal and playmate and father and friend. Now she'll learn to share her worship with her teachers ...which is only right. But no longer will I be the smartest man in the whole world. Today when that school bell rings for the first time...she'll learn what it means to be a member of the group...with all its privileges and its disadvantages too.

She'll learn in time that proper young ladies do not laugh out loud...or kiss dogs...or keep frogs in pickle jars in bedrooms...or even watch ants scurry across cracks in sidewalks in the summer.
Tomorrow she'll learn for the first time that all who smile at her are not her friends. And I'll stand on the front porch and watch her start out on the long, lonely journey to becoming a woman.

So, world, I bequeath to you tomorrow one little girl named Lauren...in a crispy dress...with two brown eyes...and a flash of light brown hair that bounces in the sunlight when she runs.

I trust you'll treat her well.

[Apologies to Dan Valentine for any missing punctuation, etc.  I couldn't easily find the original source because mamas all over the internet are copying and pasting your poem.  Um, kind of like I just did.  Except I gave you credit and most of them don't.  I am a writer.  I tried my best.  If you see this and want a link, it's yours.  Just let me know.]


Anyway, I did my own adaptation.  Here it is.  Enjoy.


I bequeath to you my little monkeys. In clothes they picked out themselves which are totally not the clothes I would have picked, but whatever, it's their big day so it's OK I guess... with their mops of hair that I promise I brushed even though they completely look like orphans because secretly I kind of like it when they look messy because it means they're having fun.

They're meeting our next-door-neighbor at the bottom of her driveway tomorrow, the female next-door-neighbor that my daughter said she would marry after she was rejected by her best male friend, who is already betrothed to another. She has no idea that the very Christian family would probably be horrified at her girl-girl marriage plans with their daughter, and has no idea that that marriage would not be legal in most states.

No longer will they have time to watch TV and play on the Wii all day long.

For five full years I have alternated between being the best mommy ever and the meanest mommy ever, depending on whether I said yes or no to a cookie ten minutes before dinner. Now I will pack a cookie in their lunch boxes and some cheez-its too, and they will probably eat them before they eat their lunch and I will never know.

They'll learn all sorts of crap, like about Justin Bieber and Monster High and whatever the boy equivalent is of those horrifying things. They will ask for iPads and want to text their friends. They will know more about the next level of tech than I do. And I will be the old lady who uses the wrong words for some computer thingie and makes them roll their eyes.

If you don't treat them well, I'll break your f**king face.

Aaaaaand that is the sort of thing that sometimes happens on my personal facebook page.  I thought I'd pass this one along to you, my faithful readers, late on a crazy Sunday night.

First day of school in the morning.  No anxiety-puking allowed. 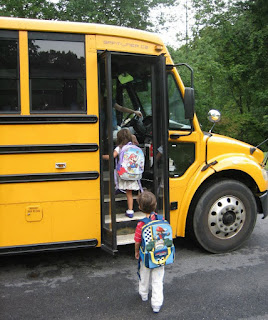