Yesterday, my daughter came home from preschool with “Freckles,” the class pet. It could be worse. It could be something actually alive. But the stuffed dog is bad enough. I am expected to photograph evidence of his “adventures” with us over the next two days and report on the activities we do together.

“Freckles watched TV with us and watched us play Mario Kart Wii for 3 hours. The end.”

The photo could be Freckles in his bag next to the door so I don’t forget to take him back to school on Friday.

But I flipped through the book of Freckles’ adventures, and no one else seemed to have gone that route. Some moms, the ones I could actually be friends with, did a hastily scribbled handwritten note with a photo of their kid hugging the mangy pooch. But some moms took this on as a serious scrapbooking task. They glued paw-print patterned paper into the composition book as a background, and used fancy scissors to cut the photos into a scallop pattern, attached with bone-shaped 3D stickers. Barf. I know I shouldn’t judge them for raising the bar, but I can’t help myself.

Here is the account I really wish I had the guts to send back in Freckles’ little book:

I was very excited to bring Freckles home with me! I was hugging him but Mommy took him away and sprayed Lysol on him until he was soaking wet. She told me she was giving Freckles a bath. Even after his bath, she kept pulling him away from my face. She washed her hands a lot more than usual, and started drinking wine before dinner. She never does that.

I took Freckles into bed with me, but when I woke up, he was not in my arms anymore. He was on the floor next to the bed. Weird.

While I was kissing Freckles, I noticed that he had some orange stuff on his face. My mom said it was “schmutz.” It kind of looks like the spaghetti sauce we had at dinner, but it couldn’t be because Mommy wouldn’t let him anywhere near the dining room. He also has some black spots on his belly. Is that why you named him Freckles? 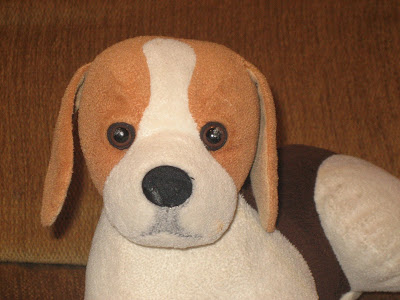 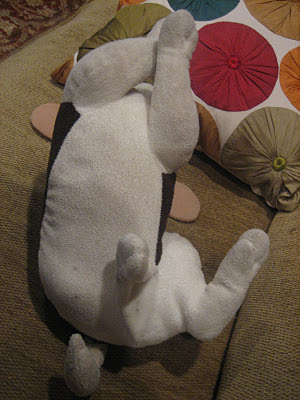 When I was looking at the freckles on his belly, I noticed that one of his legs isn’t right. It freaked me out and made me cry when I saw it. I don’t understand why one of his legs isn’t stuffed and is hanging from the middle of his belly. Mommy said maybe he had a “congenital deformity.” Daddy said it looked like a “neutered scrotum.” Do you know what that means? Me neither.

But I don’t care if his leg is a “scrotum.” Freckles is awesome. I decided to ride him like a pony, which involved humping him across the kitchen floor. My mom hasn’t mopped in a while, so I thought Freckles could help out with the cleaning by using his tummy. I looked to see if it made him dirty, but I couldn’t tell because he was already kind of gray all over. He looks just like the steam mop that Mommy uses to clean the kitchen floor! Those mop pads used to be white too, just like Freckles.

Thank you for letting me bring Freckles home. He made me feel so much better when I didn’t feel good. I didn’t even need a tissue because he is so soft and fuzzy and perfect for wiping my nose. I love Freckles so much! He is my best friend.
Posted by Pam at 8:07 PM