The goddess of inebriated crafting

Bow down to me, for I am the goddess of inebriated crafting.  Sure, I guess you have to have a pretty deep pantheon to have a goddess devoted to this.  But indeed, if I may pray to the parking gods (multiple gods devoted solely to finding me a parking space), is it so unlikely that there might be a goddess to call on when you find yourself inspired (by soul or by necessity) to create things when you (accidentally or on purpose) find yourself a little too deep into the box wine?  I say nay.  I say there is such a goddess, and she is me.  Um, I, she is I.  I can also be a goddess of dumb grammar that sounds wrong but is actually right.  I think there are a lot of us.  We’re kind of like harpies, only with red pens where our claws should be.

Back to inebriated crafting.  My creation myth involves Burning Man and a tiger print faux fur slipcover for a friend’s bicycle seat.  It involves sewing and altering clothing for friends during the heat of the day on the playa.  It involves a hat that incorporates a disco ball.  The disco ball turns using a small battery-operated mechanism and three battery-operated LEDs shine up on the spinning ball to create a disco effect.  On a hat.  The goddess of inebriated crafting was clearly born at Burning Man. 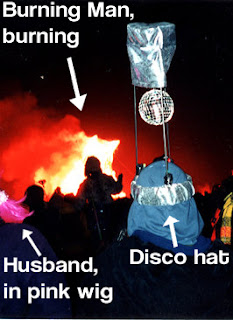 Yesterday, I was called upon to modify a cummerbund.  My kiddos’ preschool Ballet/Tap class photo shoot is today.  I will once again be putting makeup on my child, and this year I will also be slicking back my son’s dreamy Beatles-esque mop of hair with gel à la Blaine on Glee.  Maybe I should draw on some sideburns, like I did when he dressed as tiny Elvis for Halloween when he was a year old.  Because what’s cuter than sideburns on a child?  They are dancing a tap routine to music from Happy Feet, and are dressing in tuxedo-inspired costumes to simulate tuxedoed penguins.  My son has an actual tuxedo.  With tails.  Kill me, he is so cute.  But the tux came with a classic black tie and cummerbund.  The teacher ordered a red one to swap in so he would match the girls better, whose costumes are tuxedo-inspired with red accents and adorable jaunty miniature top hats.  It’s like the teeny tiny prom, only he has nine dates instead of one.

Aaaanyway, wow, I’m so not the goddess of inebriated concise writing, am I?  That will have to be someone else.  Sorry.

As I was saying, anyway, the new red bow tie and cummerbund arrived one day before the photo shoot.  And they fit me.  I’m all for body love, but y’all have seen me.  You’ve seen, like, almost all of me.  A cummerbund for my four-year-old, skinny string bean son should not fit around my waist.  But it did.  It was not only too long, but also too wide.  It could cover his whole torso like a misguided satin tube top.  I could see the teacher panicking as she tried to fold it into something that could work, you know, with duct tape and safety pins, and maybe some WD-40 and a bamboo skewer.

I stepped in.  “I can fix it.”  Palpable relief.  “Really,” she asked.  “Yes.  I can sew.  I can fix it.”  “You shouldn’t have told me that.  We’re going to call you all the time.”  It’s OK, Miss Dana.  I adore you and the way you teach my kids.  I adore the fact that you teach them the correct names for dance terms and expect perfection while also making sure they enjoy every moment of class.  You are a paragon of dance teachers.  You can ask me for anything you want.

Except I had a glass of wine with dinner.  And it was so good that I had a second.  And then after dinner, you know… whatever, shut up, don’t judge me.  But then I remembered I had to modify a cummerbund.  Oops.

Wow, that’s a tweet.  That’s less than 140 characters.  Why did I think this was a blog entry?  In my head, I heard the phrase “goddess of inebriated crafting,” and pretty much the rest is history.  So yeah, I had one day to do this.  I accidentally got tipsy.  And I seriously rocked this cummerbund alteration.  The end.

So bow down.  Leave high temperature glue sticks and spare Singer bobbins on my altar.  Adorn yourselves in hot pink faux fur, beaded fringe, and jewelry made of pipe cleaners and cowrie shells on November 21st, my birthday.  And if you ever need a dance costume on short notice and accidentally get drunk, you know who to call.