I had a weird experience this week.  I posted a photo in a facebook group I’m in, asking the women about their favorite “curvy” fashion rules to break.  You know… black is slimming, no horizontal stripes, no sleeveless tops, no skinny jeans, belt at the smallest part of your waist.

Maybe I’m the only one who used to obsessively watch What Not to Wear, checking my closet against the rules.  Jackets must close and have a “high stance” to “lock and load” “the girls” (i.e., boobs).  Nothing shapeless or oversized ever.  Straight leg, dark wash trouser jeans, no sparkles or flaps on the pockets because that draws unwanted attention to your butt. 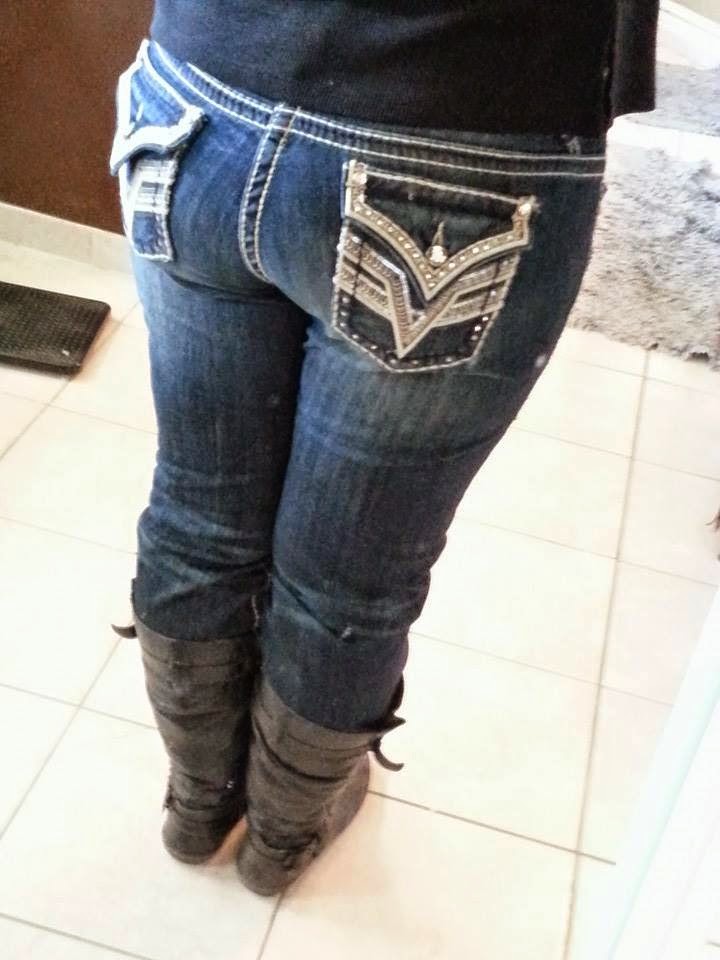 I’ve let go of those rules, and I’m happy that I have.  It’s why I started the conversation.  Basically, I bought these jeans, and I’m in love with them even though “the rules” I learned were that big girls shouldn’t wear jeans like this. I was drawing attention to my butt, and I felt great about that, because even though my body is big, I think my butt is awesome.  Why shouldn’t I bedazzle that ass?  I totally should!

I felt free and I wanted to spread the freedom, and that’s why I posted about it.

One, people shared their fabulous fashion rule breaking, and we had a “fuck the rules” moment of solidarity. Other sparkly butts.  Bikinis. And lots of curve-enhancing horizontal stripes.

Two, people expressed that there are no rules, and that the premise of my question was ridiculous.  I’m good with that, actually.  They’re just further along the path than I am.  While I still hear Stacy and Clinton’s voice in my head every time I wear skinny jeans, these other women reject the concept of rules completely.  Rock on, sisters.

But it’s the third thing that left me feeling weird.

A bunch of people basically questioned my “fat cred.”  They said that I wasn’t a “big girl,” which were the words I had used to describe myself.  It made me feel really weird.

And when things make me feel weird and I don’t know why… I come talk to you all.

So they’re saying I’m not big.  This was clearly meant as a compliment.  I get the same reaction, even more strongly, when I refer to myself as fat.  Which I do sometimes, because I am.  I think of “big” or “fat” as value-neutral descriptions of my body.  I’m not insulting myself.  I’m just describing my body.

My body is big.  It is, in fact, considered not large, not extra large, but extra EXTRA large.  I can’t shop in regular stores.  I have to go to special stores for people who are bigger than “normal.”  I am considered “obese” by medical terms, and would have to lose more than 30 pounds to be merely considered “overweight,” and more than 60 pounds to be considered “normal weight.”

And I am fat.  It is what it is.  There is a lot of extra fat tissue on my body.  It’s how I’m made.  I could probably get rid of some of it, but historically for me, that weight loss comes at the expense of a healthy relationship with food and my mental health.  I’m happier and healthier accepting my fat body and just making sure I put real, nutritious food in it and move it around a lot.

By any definition you can come up with, I am big.  I am a fat woman.  By clothing sizes, by medical terms, by the tissues that make up my body composition.

But there’s one set of definitions by which I am NOT fat.

I think that’s why I feel weird when people tell me I’m not big, or not fat.  Because by doing so, it feels to me like they are equating fat with ugly.  It’s the only definition that makes sense to me.  Because by any other definition, yup, I’m fat.  Except for the definition in which fat equals ugly.

My whole thing… the reason I post bikini photos right alongside my clothing size and weight… is that I want the world to see that a woman can be plus sized, extra extra large, weigh 220 pounds, have lots of fat on her body, and be slammin’, gorgeous, sexy, beautiful, and effing awesome.

Fat does not equal ugly.  It just doesn’t.

Not every larger woman will want to reclaim that word or even hear it.  Fat will probably always be a sensitive word for many of us, and even to some degree for me.  I can say it in a reclaiming way, but it could still be used against me if the intent is cruelty.

But I choose to reclaim it as a neutral descriptor, in hopes that I can help to disentangle the concepts of fat and ugly.  Because my big fat body is hot as hell.