Almost two years ago, a hummingbird flew into my house and had some trouble finding his way back out.  This happened while I was battling a particularly stubborn bout of depression, attempting to self-medicate with fresh air and a beautiful spring day instead of my usual questionable methods, naps and bourbon.  In his struggles, the hummingbird taught me a life lesson that helped me find my way back into the light. 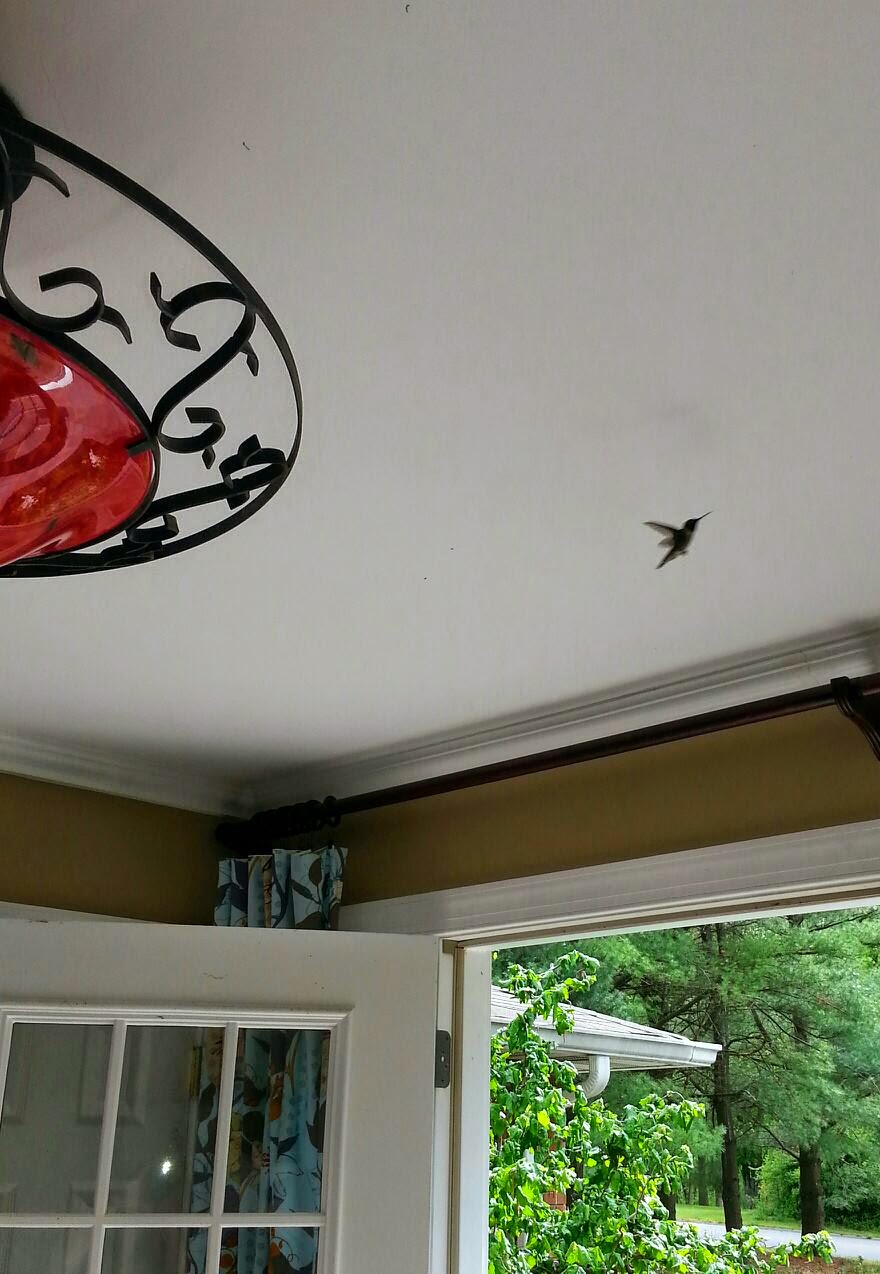 The lesson was this: When you find yourself struggling hard, try something different.  When you feel like you’re banging your head against the wall, look around for a door.  Also, when you feel like shit, maybe go outside, because that’s where the flowers and air and vitamin D live.

I knew almost immediately that the hummingbird was my next tattoo.  It had been fifteen years since my first one.  I left the tattoo shop after my first excited to get another. I was totally bitten by the ink bug.  I wanted more.  But somehow the right tattoo didn’t come along until now.

It took more than a year to find the right artist, but I finally did.  Jim Judeikis at Saints and Sinners Tattoo in .  He had done a friend’s scar cover, and when I checked out his portfolio and shamelessly stalked his instagram, I knew he was the one.  He doesn’t do a lot of tattoos like mine, or at least didn’t have a lot in his portfolio, but every tattoo had beautiful lines, even to my picky eye.

So once we got our tax return money and somewhat recovered from Christmas spending, I called for a consult.

All of my nerves were activated.  My first tattoo had come to me while meditating.  I had drawn it, and simply asked the artist to copy it onto me.  This was different.  He would be drawing it.  I just had ideas.

I went into the shop for my consult clutching my packet of materials, including similar tattoos I liked, a really bad hummingbird drawing I had attempted, even mirror selfies of the gist of my tattoo inexpertly scribbled on my own shoulder with eyeliner.  I put enough money in the meter for 45 minutes, because I was 15 minutes early and budgeted for a half hour consult.

Ten minutes later, I walked out, lighter by a $150 deposit, with a tattoo date in my phone’s calendar, and the distinct impression that Jim and the front desk guy might be making fun of me for Type-A’ing my tattoo consult.

I was clearly and intensely over-prepared for my consult. And I didn’t fit in.  Forty-one, no visible body mods, wearing mom jeans and a tank top (in case he wanted to…. I don’t know… like, look at my shoulder or something.  Spoiler: He didn’t.)  All the blue and purple hair in the universe couldn’t disguise the fact that I didn’t belong in there.  I don’t even know what the other customers milling around were wearing, but they all seemed a lot more comfortable than I did, and were dressed in ways I envied but couldn’t duplicate on my plus size aging body without looking silly.

I love my body, and I love my fashion, and I love who I am.  But something about being in a tattoo shop pushed all of my “not cool enough” buttons.

Every time I do something a little bit crazy—dye my hair wacky colors, get a tattoo, wear fabulous clothing, pose on the internet in my underwear—I have this moment.  This “who the hell do you think you are” moment.  In my head, I’m still the dorky kid who did too well on math tests and lied to her friends and told them she got a B, because straight A’s were for losers.  And at the same time, I’m also the “basic bitch” suburban housewife and mother of two and minivan owner.  And pumpkin lattes are delicious, and yes, I do wait all year for them as a matter of fact.

But my insecurities and social paranoia aside, I felt very confident in Jim as an artist.  And I was beyond excited to finally get the tattoo I had been talking about for almost two years.

The day of the appointment came, and I was so nervous I could barely eat.  Excitement and trepidation ran through me until I couldn’t tell which was which, just that my heart rate was up and my hands shaky.  What if I forgot how much tattoos hurt?  Could I really sit there for three and a half hours in pain?  What if it was terrible?  Maybe I should have used that numbing cream a nurse friend had slipped into my purse even after I told her I didn’t need it.  What if I didn’t like the drawings Jim had prepared?  What if what if what if…. And also, tattoo day!  TATTTTTTTOOOOOOOOO!! Tattootattootattootattootattootattoo! Blaaaaagggghhhhh!!!

I walked into the shop pretty much ready to puke.

Three giggling women and a (non-giggling) man walked in at the same time.  They were apparently there for some spur of the moment (possibly alcohol-encouraged?) piercings.

One giggling blonde asked the front desk guy, “Is it going to hurt?”

And I couldn’t help it.  All of my tension and anticipation and heightened emotion coalesced into a quick bubble of laughter.  Front desk guy met my eyes.  In unison, we said, “Yes.”

I started to feel better.

I had to wait for about fifteen minutes for my appointment so Jim could grab some dinner.  Actually, I think the guy said lunch.  Lunch at 5:30pm.  That is so not my life.  But while I waited, a bunch of people came in and out.  It was a beautiful warm Saturday evening in Fells Point, one of the first pleasant, dry weekends of the season.  Most of the people coming in were just out wandering before dinner.  They weren’t there for ink.

I did belong there.

Mom jeans and all.

Who the hell do I think I am?  Hell if I know, but I was getting a damn tattoo, and it was going to be awesome. And I didn’t even consider the numbing cream.  Well, didn’t seriously consider it anyway.  Because I’m a bad-ass.

Well, for a suburban housewife.  I mean, for a minivan driver who likes pumpkin lattes, I am totally a bad-ass.

Eventually Jim came down and I followed him upstairs.  We went over his drawings, made some minor adjustments, and sat down to get started.  He asked if I wanted to watch a movie.  I said no because I wanted to be in the moment.

I didn’t say that in the moment thing to him.  I just said, “No thanks.”

He went to put the music on and I saw he had been listening to comedy before I came in.  I asked him to put the comedy back on.  He looked skeptical, and said, “Are you sure?  It’s pretty nasty.”

Several minutes later, we were both laughing out loud at jokes about golden showers.  Now the problem with that is that it made my shoulder shake every time I laughed, so we had to turn it off, but the ice was broken.  We were good.  Bonded over dirty jokes.

The next three hours?  Well…. they were fine. Tattoos don’t tickle, but except for one small ouchy spot, it was pretty easy.  We talked about politics, , how he came to own the shop, kids, TV shows, a shared hatred of patchouli.  We talked social media, travel, and schadenfreude.  And ink.  We talked about tattoos.  His.  Mine.  Others he had done.  The time passed shockingly quickly.

Before I knew it, I had taken my excited mirror selfie and gotten wrapped up in bandages for the ride home.  My husband was still fifteen minutes away.  He was driving me because I have a very strong endorphin response and get loopy and high from pain, and I didn’t trust myself to drive.  So I hung out in the lobby with my shoulder wrapped in a cross between a black trash bag and diapers, waiting for my ride.

One by one, the artists came downstairs to hang by the front desk and get ready to go.  I was closing the place down.  I was separate from them, over in my chair, facebooking my face off about my new ink.

But I belonged there.  And all of them, with their intimidating facial piercings and stretched lobes and every visible bit of skin covered in ink… they couldn’t have been nicer to me.

To me.  The over-prepared, middle-aged, fat, suburban mom.

Maybe it was all of the endorphins, buzzing me enough that an hour later I still had trouble mastering the simple task of filling a glass with water, but I had this beautiful moment.  A oneness.  A dropping of masks.  A releasing of roles.

I realized that my insecurities and nervousness about being accepted are the things that hold me back from connecting.  That my preoccupation with how others might see or judge me gets in the way of being completely myself.

I should stop doing that.

I spend a lot of time and energy struggling with social anxiety.  And when I find myself struggling, I’m going to try something different.  I’m going to stop banging my head.

And my beautiful new ink is here to remind me to find the door, and fly.
No, not fly. That's too cheesy. Be a bad-ass. That's what I meant to say. 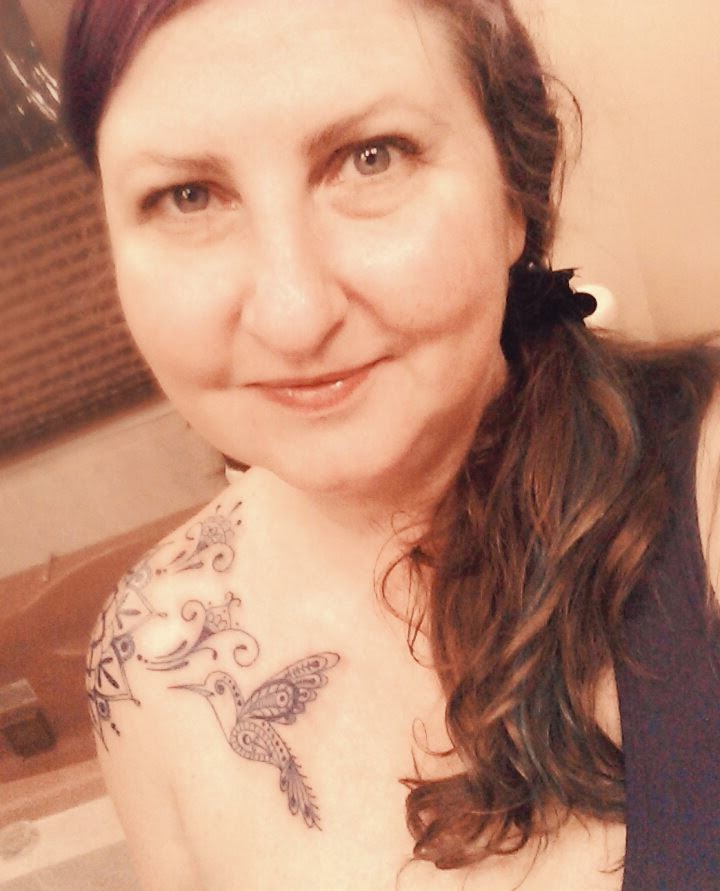 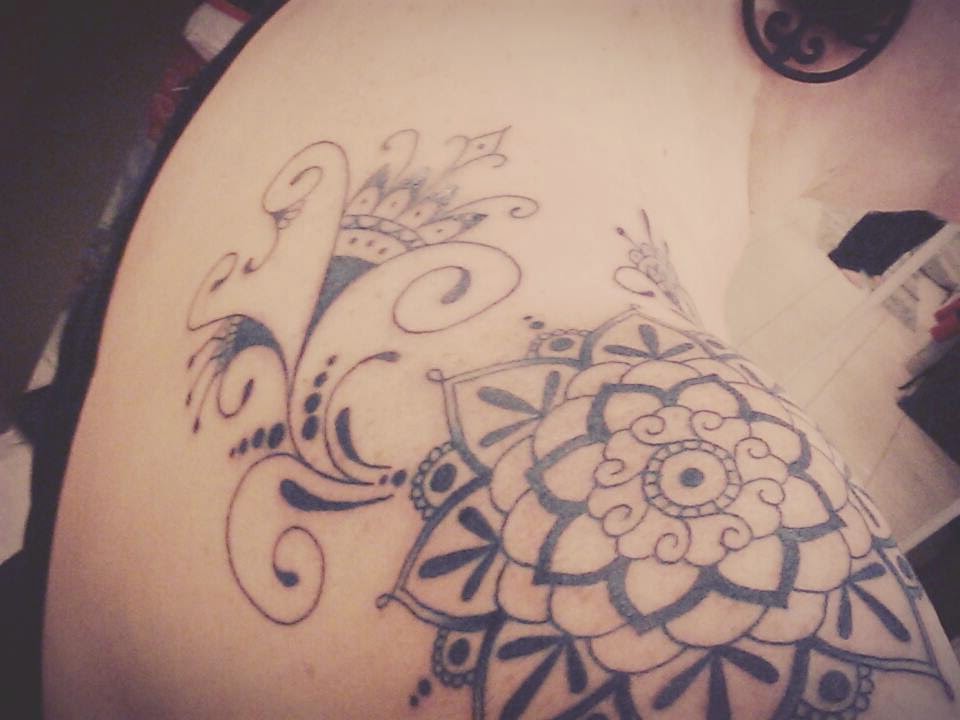 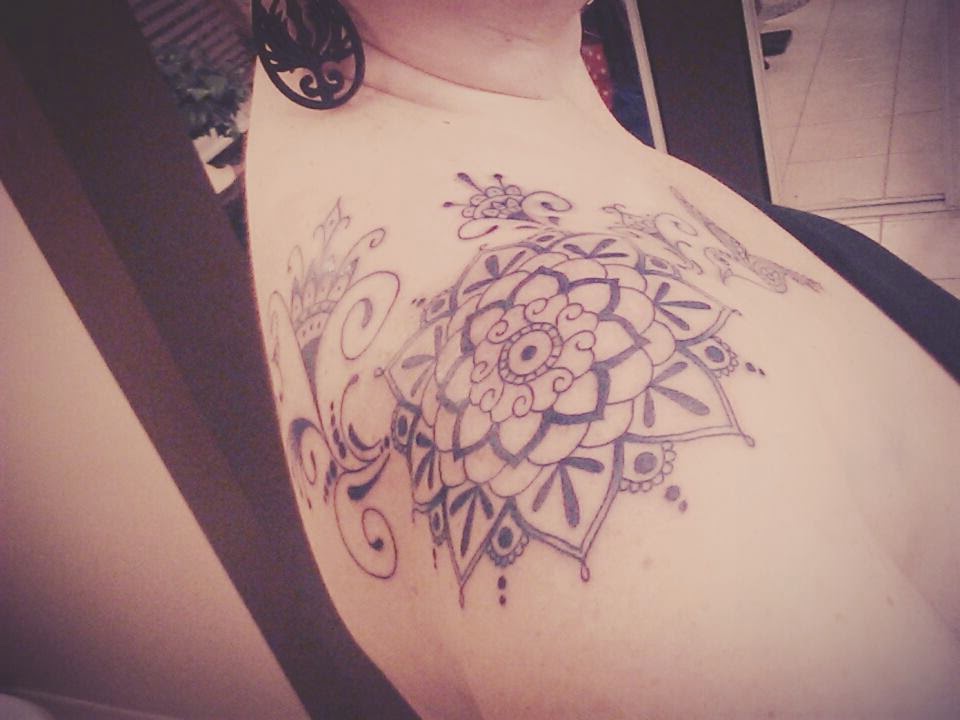