I hit a big weight loss milestone this week, or two actually. First, I am halfway to my goal. I’ve lost twenty-eight pounds. Twenty-seven to go. But the bigger milestone for me is that this week I weigh what I weighed when my husband and I got engaged. Not quite yet down to what I weighed at our wedding, a weight that was achieved using unhealthy means when my dress arrived just a bit too tight, but I now weigh what I weighed when he decided that I was the girl for him. I know he doesn’t value me for my waistline. I know he loves me and thinks I’m beautiful at any size. But there is still something comforting to me about being back at the size I was when we were dating.

It happened gradually. A pound here, a pound there. Eating more frequently at restaurants. Making a meal because we’re a couple, when I would have had a bowl of cereal if I had been alone. Having evil things like Doritos in the house because he likes them. Watching more TV than I otherwise would, an activity that just goes so darn well with snacking. And age, and hormonal changes, and popping out a couple of kids, and eating leftover Kraft mac and cheese off of their high chair trays, and getting takeout pizza at the end of exhausting days, and eating too much McDonald’s because they had Batmen or My Little Ponies in the happy meals. It happens. It happened.

This summer will be our 9th wedding anniversary. In those 9 years, not including the unhealthy wedding weight loss that came back on almost immediately, I gained nearly 30 pounds. A few pounds a year. Never really noticeable at any given point. I am blessed with a body that can hold quite a bit of weight. I gain all over, and stay proportionate. So my comfy jeans became my regular jeans, and I got some new comfy jeans, and a few years later, they became my regular jeans. While it’s certainly covered under “for better or for worse,” perhaps marriage vows really need a “for thinner or for fatter” clause, because I know I am not the only one who got married and then found themselves buying bigger and bigger comfy jeans. Hubs was on the same trajectory, and had gained about 20 pounds over the years. He recently lost a bunch of weight too, after a cardiologist scared the bejeezus out of him. He is actually now a little below what he weighed when we got married. He lost 25 pounds in 2 months. Men suck. It’s not fair. But moving on.

I’m thrilled about my weight loss, because I know I am doing it in a healthy way, and I know it is lowering my risk for all kinds of crap. I also admit that looking better is a very nice plus. But it’s bringing up some baggage. I never realized it, but I guess there was a part of me that felt like I had pulled a bait-and-switch. “Oh, honey, you know that pretty girl you married? Yeah, she’s gone. I ate her. You get me instead.” Weight loss has highlighted how much of my concept of my own value is tied up in physical appearance. It’s not something I like knowing about myself. I hope it is something I can avoid inadvertently teaching to my daughter. And my son too, of course, but I think of this appearance = value issue as primarily a woman thing in our society. I hope I can teach my daughter to love and value herself for what is inside, and I hope I can teach my son to value women for what is on the inside too. Like his dad.

Maybe if I keep teaching it to them, some day it will sink in for me.

And now, for your viewing pleasure, some photos of my trip up and down the scale. It was easy to find photos at 8-10 pounds thinner than my peak weight, but there are almost no photos of me at the very top of the mountain. The only ones I could find were from the Maryland Faerie Festival last year, complete with kooky dreads and headpiece, but it will still give you the idea. 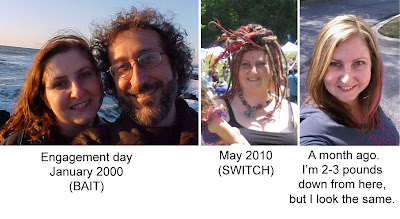